The Goulburn and Murray Valley area has had cold mornings but mostly clear days last week. Urea application continues, trying to capture any rainfall to wash it in. The feed continues to grower, and the valley is still very green. With the onset of colder weather the growth is much slower now but still grazing well. The drier weather this week will help growers along the Murray River who are cutting early sown cereal crops for sil¬age.
South West WA has reported it will be dry for at least another two weeks. Hay crops are up and looking favourable at this stage. The last of grain crops are in now, with barley plantings being replaced with wheat. Some export hay growers have increased plantings for new season hay.
Southeast South Australia received 25-31mls in the last week, the Mount Gambier area is very wet. The first of the season’s crops are starting to canopy over, everything is looking good. It’s not too wet for the majority of the Southeast. First of the in crop weed spraying has occurred, farmers keen to keep the plantings nice and clean. 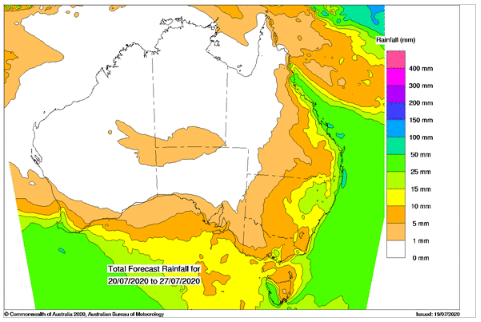 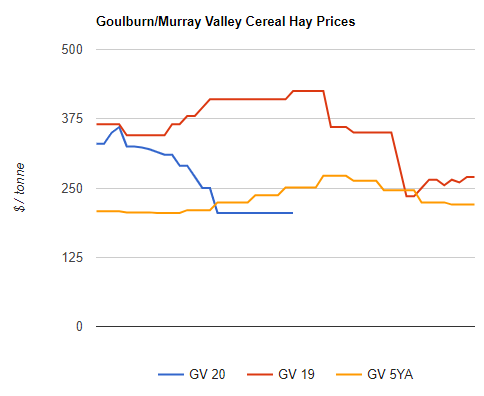 Enquiry is quiet and demand is low with enough feed on hand either in paddocks or in sheds. Some hay is still moving out of the region to Cooma, NSW where it is still dry.
Growers in the Riverina and southern Mallee who were offering cereal hay at $240 a tonne ex-farm plus GST last month are now competing with new sellers at $190 to $210.
Through price discounting to long-time buyers, some growers are finding sufficient demand to help clear their shed before the new crop in spring. Some sellers are realising that as well as discounting, often personal contacts are also required to make a sale.
All straw from Victoria is now priced under $100 a tonne ex-farm, but finding a buyer at any price will still be a challenge.

Many are trying to get by on what feed they have as domestic prices are felt to be just too expensive.
There is very little hay or straw left that is not spoken for in Western Australia. Straw, lucerne, and pasture supplies are difficult to source. Growers have had to turn new inquiries down as they do not have the stock.

Demand remains flat in southeast South Australia. There is still reports of nervous selling, potentially feeling that any old and damaged stocks need to be moved before a flood of new season hay comes onto the market in the spring. There are also reports of some growers holding off for higher lucerne prices.
Demand will increase as it does for most areas when feed is needed to carry stock during the cold months, but this has not occurred to any great degree so far. Some dairy farmers further south that have been waterlogged have reached out for good hay.